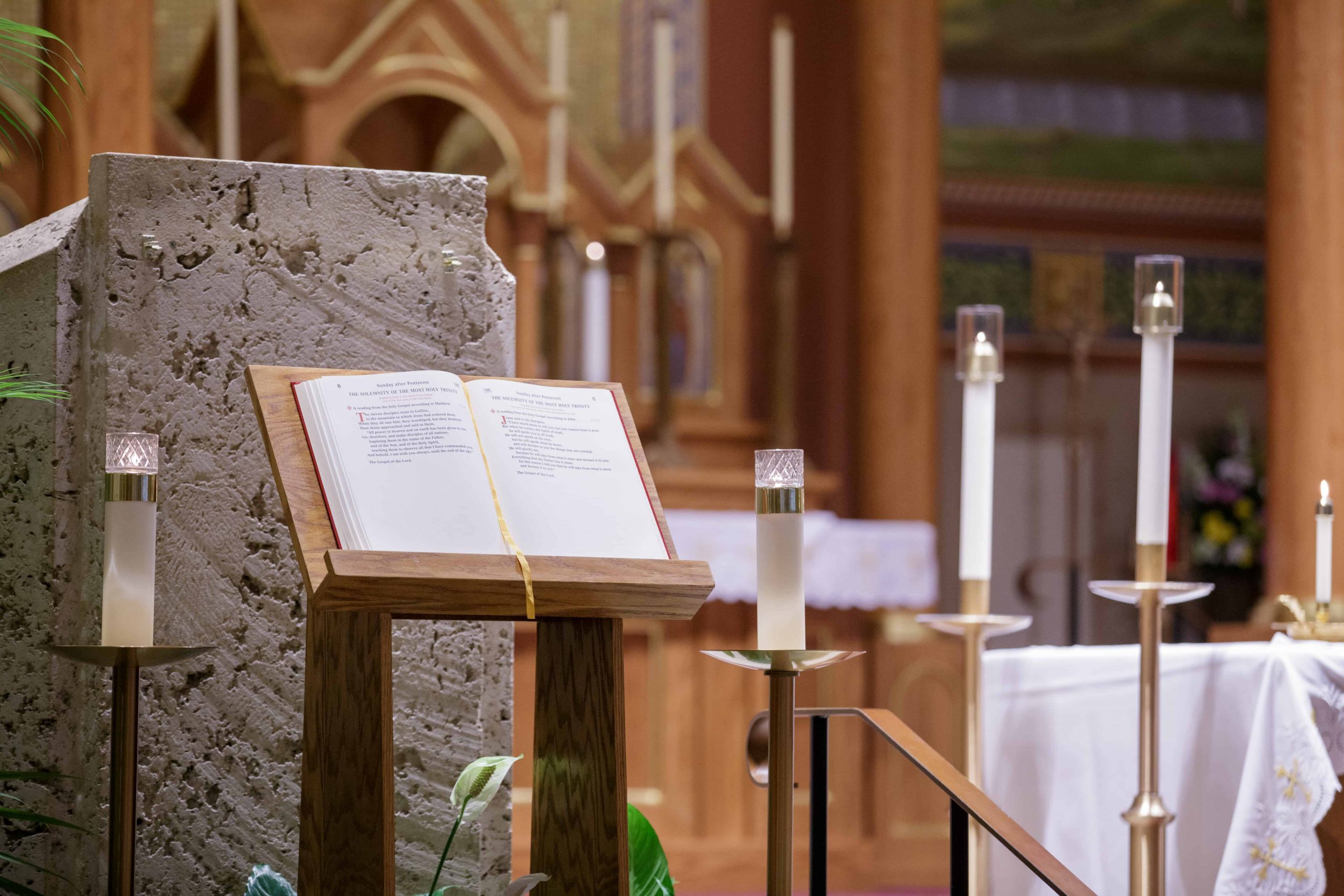 St. Helen was the first Catholic Church established in Indian River County.  Missionary, Reverend  Rupert Gabriel of the Order of St. Benedict celebrated the first Mass in June of 1919 at the home of Anna and Louis Schlitt.  Approximately twenty children and adults attended.

A wood frame church was completed in December of 1919.  Father Gabriel celebrated Mass every Sunday until poor health forced him to retire in 1926. This original church is now located just north of the Christian Living Center and currently serves as our school library.

The first resident pastor, Reverend Michael Mullally, was assigned in October of 1929. Recognizing the need for a Catholic grammar school in Indian River County, he established St. Helen Catholic School.  Three religious Sisters of St. Dominic of Adrian, Michigan, Sister Immaculate, O.P.. Sister Anselm, O.P., and Sister William Ann, O.P. arrived  in Vero Beach and the school opened on September 16, 1940 with an enrollment of 27 students. The original schoolhouse was located behind the church approximately where the Christian Living Center is located today.

Reverend Patrick O’Brien was assigned as pastor of St. Helen in 1950. Father O’Brien built a new rectory including parish offices and began construction on our present church. Religious Instruction for children not attending St. Helen School was begun and numerous fund-raising events were held to cover the costs of the $250,000 church.

Father John F. McKeown oversaw the final phase of construction on the new church in 1954, when he assumed the role of  Pastor. The stained glass windows, the pink marble, the Italian statues and many interior accents and pieces still found today were added at this time. The church was dedicated on March 6, 1955. The original church was converted into a Parish Hall. A new four room classroom building and convent were also constructed.  The mission of St. William in Sebastian was established by Father McKeown.

Reverend Hugh J. Flynn served as pastor of St. Helen from 1964 to 1969. Under his administration, a weekly Bingo Night was established and the St. Helen Harvest Festival was created.  Created to instill a sense of community in the hearts of the parishioners, the festival opened on November 19, 1965 on the grounds of St. Helen and raised $13,008, more than needed to pay for the $12,000 air conditioning system in the church.  The St. Helen Service Center, a multi-purpose facility, was constructed in Gifford and opened in 1967 to serve the underprivileged.

Reverend John B. O’Hare became the pastor of St. Helen in 1969.  Under his direction the present Parish Center was built and opened in 1975.  The statue of St. Helen was erected as a tribute to our first pastor in 1975.

Monsignor Irvine Nugent became pastor in 1976. Under his guidance, the  Neighborhood Apostolate was created in 1977 to welcome and care for parishioners on a more intimate basis. Numerous ministries and programs were created focusing on faith enrichment, worship, service and continuing Christian Development. The expanding needs of the church community were addressed with the remodeling of the former convent building into the Christian Living Center. The Outreach Office was created as an extension of the Neighborhood Apostolate to expand parish life and serve the needy.  A ministry program for the sick was also developed. St. Helen Parish became part of the Diocese of Palm Beach in October 1984.

Father Michael W. Edwards became our seventh pastor in 1999. Under Father Edwards’ direction, St. Helen Parish has dedicated itself to being a Stewardship Community. Father Edwards continues to challenge the parish family to live a life of discipleship and accept God’s calling to be a community of faith focused on using individual time, talents and treasures to help better God’s Kingdom. In 2006, Father Edwards received the title of Very Reverend and the position of Vicar Forane for the Northern Deanery in addition to his title of Pastor of  St. Helen.