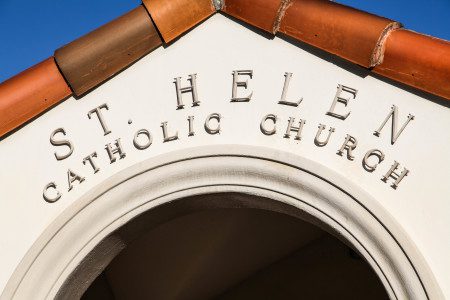 The progress continues on the third phase of our Centennial Renovation. We are all looking forward to returning to the church for our masses in early October. This third phase completes a renovation that brings to the St. Helen parish and our community, a unique, original and informative depiction of our faith and our particular reverence for our patron saint, St. Helen.

Not included in the original renderings, it was later determined that in keeping with the new look of the church, it was appropriate to replace the existing Stations of the Cross on the walls in the church. Each new Station is depicted with original artwork from Conrad Schmitt Studios, our main contractor, and will be framed in specially crafted wooden frames (by the same company that provided the altar baldacchino).

The specific artwork for each station as well as the design of the frames and accompanying gold lettering have at this time, received final approval. (A rendering of each station is seen below.)  Not included in the original cost estimate for Phase III, the church is offering an opportunity for parishioners to donate directly for a particular Station of the Cross.

The sponsorship program is outlined below:

2. The sponsorship may be divided into several donors, i.e., four families each do $2,500, several ministries combine resources to sponsor a station, etc.

3. Anyone or group who has already donated to Phase III may ask that their donation or combined donations be used for sponsorship.

4. There will be 14 sponsorships available with the Station to be sponsored chosen by the donors on a first come basis.

5. Station donors will be recognized unless requested otherwise.

PHASE THREE of our Centennial Renovation has begun. PHASE THREE will involve the painting of two murals related to St. Helen on the transepts, completion of the nave – the main body of the Church, and new Stations of the Cross. Conrad Schmitt Studios will continue the work, which will be completed by October 2022. The cost to the final phase is estimated at $1,100,000. To date we have received one sizable donation and several others totaling $749,000. The remaining balance of the cost will come from some reserves of the Church and a PHASE THREE CAMPAIGN which will begin once all of the marketing data is in hand. Due to the size and the history of St. Helen Church we are hopeful upon completion of this phase to submit an application to the Vatican for St. Helen to be designated as a minor basilica.

We will be providing ongoing information on our plans, renderings of the work to be performed, the PHASE THREE CAMPAIGN, and alternate plans for Masses during construction.

If you wish to donate to phase three of our Centennial Renovation you can do so by:

2. Utilize your Faith Direct account to schedule funds for this collection.

3. There are special envelopes designated for Centennial Renovation at the Church doors and in the back of the church.

4. We are now able to accept credit card donations. Please stop by the parish office.

In our Christian history, there have been many significant moments of spiritual inflection. History tells us that the early Church was persecuted mercilessly for the first three centuries. With very few exceptions, every pontiff of this era entered eternity as a martyr. Thousands upon thousands of faithful were forced to walk a via crucis and die for the Son of God and His Gospel. This all changed when Emperor Constantine, son of St. Helen, had a famous vision prior to the battle of the Milvian Bridge in 312. Our Lord revealed a bright sign in the sky composed of the Greek letters Chi and Rho with the Latin words “In Hoc Signo Vinces” beneath it. We know that Chi-Rho are the first two letters of the title Christ. The Latin phrase means “In this sign conquer.” Constantine had this symbol emblazoned upon his army gear, shields and weapons. When he defeated Maxentius in this historical battle, Christianity was declared legal and protected by law with the Edict of Milan in 315 AD. This painting portrays the emperor Constantine seeing the vision in the sky with the opposing armies in the distance ready to do battle. Historically, this is an important moment. Spiritually, it is a key in the development of Christianity across the Roman empire and world. As Tertullian famously said, “The blood of the martyrs is the seed of the Church.” The first centuries martyrs ensured the faith survived by offering the greatest gift possible, their life.

In this mural, we see the historical moment when St. Helen traveled to Jerusalem and found the true Cross of Christ. With piety and devotion, Helen approached her son, Constantine, desiring to travel to the Holy Land and erect three major basilicas. In the year 325 AD, Helen entered Jerusalem and set out on this noble task. She consulted the local populace as to where the site of Jesus’s crucifixion would be found. It was revealed that the Romans had constructed a pagan temple dedicated to three deities was placed over it. Helen had this enormous structure removed at great personal expense. Upon removal, a small hill along with a pit which contained three crosses was revealed. Helen consulted Bishop Marcarius, the local prelate of Jerusalem, who instructed her to have a sick individual touch each of the crosses and only the true one would bring healing. In this mural, we see the true Cross being shown in the center with a sick person being brought to touch it. Once healing happened, the veracity of the true relic was confirmed. St. Helen is profoundly important for the universal Church as well as us here in our small town of Vero Beach.

PHOTOS FROM LAST WEEK IN JULY

BEHIND THE SCENES! RENOVATION WEEK ONE!

BEHIND THE SCENES: RENOVATION WEEK THREE!